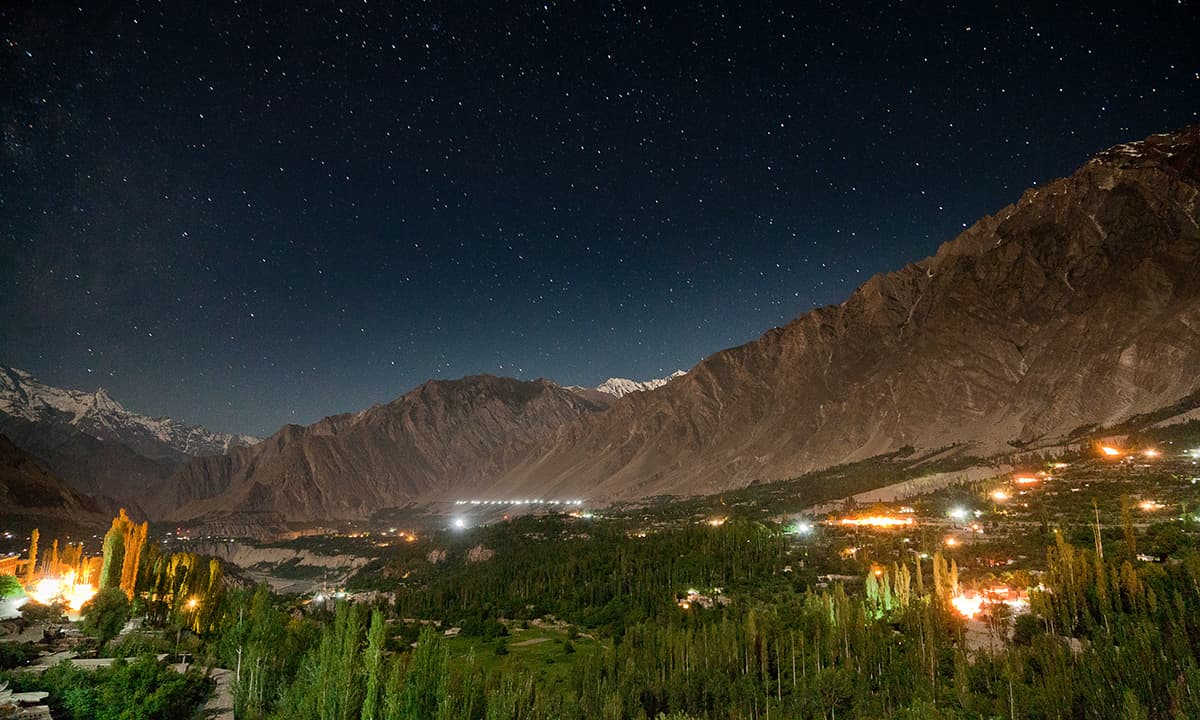 Hunza is not a city but a valley. The valley consists of three areas …

The most important city of Hunza is Aliabad while Karimabad is famous for its bananas and scenery.

There are some areas of the country where tourists are stunned. Such a charming, charming and beautiful natural scene that is like a dream. The same thing happened to me when I saw the beautiful places of Hunza. At the same time, he thanked his Lord for bestowing such beauty on our country. In that journey, instead of a long road trip, I flew from Pindi to Gilgit.  It was September and it snows there from November. So the journey was very quiet.

During his stay in Gilgit, he met his friends Justice Yar Mohammad, Khushi Mohammad Tariq, Inayatullah Shamali, Jamshed Dikhi and Saadat Ali Mujahid and also had a poetry session.

One beautiful morning, when the sun was shining brightly, we set off in the Hunza Valley in our friend’s jeep. Hunza is only 100 km from Gilgit. After traveling for two hours, we reached Hunza. It is located north of Gilgit along Nagar and on the Silk Road.

Located on the banks of the Karakuram High Way, 700 km from Islamabad, the valley is 2,500 meters above sea level. His route from Islamabad is Hassan Abdal. Abbottabad Mansehra There was a coat. Besham. داسو۔ چلاس۔ The Hunza comes from Gilgit. Another route joins Mansehra with Balakot Naran and Babusar Pass with Chilas. Modern comfortable public transport from Rawalpindi to Gilgit and Hunza runs daily. PIA flights from Islamabad also go to Gilgit two days a week. Apart from this, you can also go to Gilgit and Hunza from your car. Due to snowfall and heavy rains, the Karakoram Highway continues to be damaged day after day and its repair work continues.

It was April. The sun was shining but not intense. When the vehicle left Gilgit and reached Nalar, there was a spring of colors. The trees were covered with white, pink and orange flowers. By the time I reached Hunza, I was engrossed in colors and was wondering why I didn’t know before that there are so many colors in Bihar and such seasons in Pakistan.

The Hunza Valley covers an area of ​​7,900 square kilometers and is a district of Gilgit-Baltistan. Where the language is Broshki. It is considered one of the most difficult languages ​​in the world. While Wakhi and Sheena languages ​​are also spoken. Hunza is generally considered to be the name of a city while it is the name of a valley which includes many small valleys and towns.

The most important city of Hunza is Aliabad while Karimabad is famous for tourism and its scenery. There are many hotels in Karimabad. In addition, accommodation is available on a very affordable monthly and weekly basis.

If we shed light on the historical background of Hunza, then according to Mustansir Hussain Tarar, “Until 1889, the British lived in Gilgit, drank alcohol and ate boiled potatoes. For them, the Hunza people, hiding in an icy valley just 60 miles away, were beautiful but savage and ignorant people who plundered caravans to Kashgar and Kandahar.

In the same year, a Russian officer by the name of Gromjpki entered Hunza with his soldiers and expressed his intention to deploy a Russian contingent there.He had an agreement with Mir of Hunza Safdar Ali that he would let his mail reach Kashgar and in return the British would continue to pay him a reasonable amount. But the arrival of the Russians alerted them. Even so, he was looking for an excuse and this excuse was very reasonable that after Hunza, the Russians could also come to Gilgit and even though Delhi is far from Gilgit.

In 1890, his army, led by Colonel Durand, captured the fort of Nalat, which was considered the aqueduct of the Hunza. In this battle, the Hunza people had a few guns and the British army was armed with rifles and machine guns. ۔

Baltat Fort in Hunza Valley of Gilgit-Baltistan which was built 700 years ago. This fort has 62 gates. Until 1945, the fort was used by the Hunza rulers. Later in 1990, the son of the last ruler of Hunza formally handed over the fort to the Baltat Heritage Trust.

The Baltit fort was destroyed by the British in search of treasure but they found nothing but a few bags of gunpowder. The British appointed Mir Safdar Ali’s brother as the new Mir of Hunza. After this the fate of the Hunza people became associated with the Maharaja of Kashmir but due to their distance from the center they always followed their whims. When the subcontinent became independent, Hunza’s imprisonment ended.

Karimabad is surrounded by high peaks whose views are world famous. Among the peaks around Hunza are Raka Pushi, Duran Pack, Golden Pack, Ultra Pack and Lady Finger Pack. Karimabad’s bazaar is full of Hunza cultural items. As Hunza attracts more foreign tourists than Pakistani tourists, this market feels a bit expensive. Mir’s old house in Karimabad adds four moons to the beauty of Baltat Fort Karimabad. It is about 700 years old.

Near Karimabad is another old town, Altit, which is considered to be the oldest area in the Hunza Valley.

Altat Fort is nine hundred years old. One of the most popular tourist attractions in the vicinity of Hunza is the Duiker or Eagle Nest, which can be reached on foot or by jeep. The place is famous for the sun’s rays falling on the snow-capped peaks at sunrise and sunset. From here, the beautiful track of Ultra Pak and Ultra Maidan also starts. You can also take a jeep to Nagar Valley on the other side of the river, where the view of the glaciers is breathtaking. The beautiful village of Manapan at the foot of Rakapushi is the perfect place to spend the day. Arriving in the beautiful valleys of Nomal and Naltar, tourists forget themselves.

Lake Ataabad, which was formed on the Hunza River as a result of a natural disaster, is now a recreational destination. Boating in the blue waters of the lake between the high black mountains becomes a memorable trip.

The journey to the world’s highest pass, Khanjarab, near the Chinese border, was a memorable and beautiful journey. There is a big gate in the middle of the road in Khanjarab, just from there the chain starts. Like other tourists, I went a little beyond this gate and walked on Chinese soil.

Lake Ataabad, built on the Hunza River, is also a recreational area.Tourists enjoy boating on the lake.Gilmat village, Bort Lake, Pasu village, the last border of Pakistan which is the way to enter China, can also be visited by Susta villages.

Gilmat village, Bort Lake, Pasu village, the last border of Pakistan which is the way to enter China, can also be visited by Susta villages.

The Hunza River is the main river of Hunza and Nagar in the northern part of Pakistan. It is very dirty due to the mixture of too much soil and rock particles. Various glaciers and daggers and click ditches are its basis. Then the Naltar Nalla and the Gilgit River meet in it. It is eventually found in the Indus River. The Silk Road runs along this river.

Returning from Hunza to Gilgit, when our plane took off into the air, nature was heavy, it seemed as if we were separating from our close relatives. At that time, the natural beauty of Gilgit-Baltistan had made me its captive and I had been touring those areas for many years and still do not miss the opportunity to visit those areas when the opportunity arise.

The journey to the world’s highest Khanjarab Pass, located along the Chinese border, is one of the most beautiful moments.

Well-equipped hotels and locals are available as local transport and guides.

Many local tourism companies in Lahore and Islamabad bring domestic and foreign tourists, students and families for tours in groups at reasonable prices.

On the other side of the river is the Nagar Valley with a view of the glacier.The beautiful valleys of Nomal and Naltar have beautiful tourist attractions

Some of the frequently asked questions

Where is hunza valley?

It’s located in the teritory of Gilgit Baltistan .From Gigit city it’s just 100 km away.And it just takes half an hour of drive to reach Karmabad Hunza.The condition the road from Gilgit to Hunza is perfect.The well known karakoram highway is the only road between Hunza and Gilgit.

How far is Hunza from Gilgit?

How do I get from Gilgit to Hunza?

Is road to Hunza safe?

The condition the road from Gilgit to Hunza is perfect.The well known karakoram highway is the only road between Hunza and Gilgit.But you have to take care on turns and try to reduce your speed.Dont cross the speed limits.

What is the best time to visit Hunza?

The best time is from April to september and in winter december to febuary is the perfect time as you will also witness the snow fall.However ,in winter the temperature in Hunza valley remains close to zero degree centegrate.

How much does a trip to Hunza cost?

It depends on your requirement and the duration of travel.As far as accomodation and food is concern you can stay there for one day in just Rs 500.

What is the hunza valley distance from islamabad?

The road distance is 581.6 km,and the distance between Islamabad and Hunza is 320 km

You can travel by air through out the year 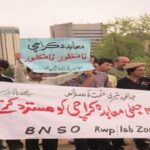 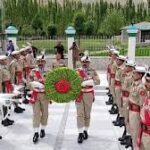